by Sun Ra And His Mythic Science Arkestra 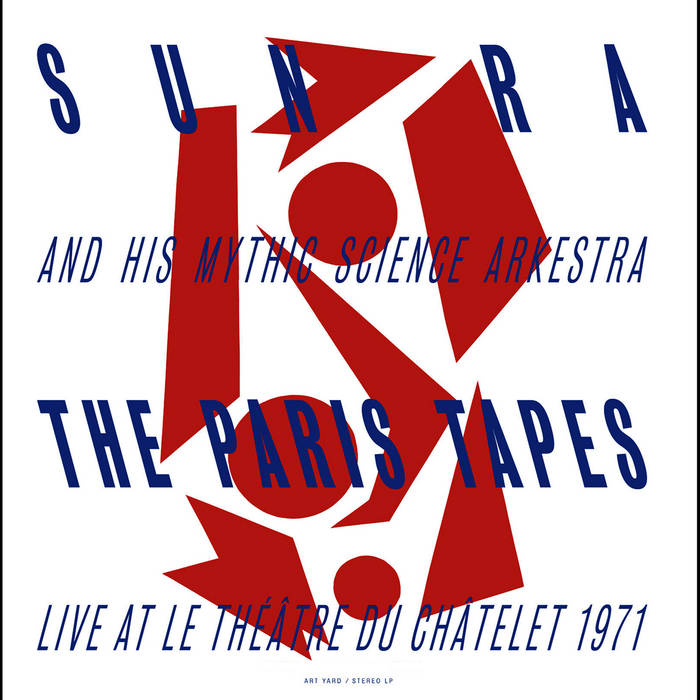 Listening to the opening of Sun Ra ‘Live in Paris’ 1971 calls to mind a quote from the Musicians Psalm.

‘Praise Him with the Cymbals, the High sounding cymbals.’

As all events within the African Diaspora commence with the proclamation of the Drum, this analogy is an excellent example of the use of symbolism; orchestrated by Sun Ra. The praise of the Most High reflecting Sun Ra’s ever constant homage to the Creator. The Oration of the Drums speaks to the origins of what playwright Amiri Baraka (Leroi Jones) referred to as Great Black Music; Drum legend Lex Humphries with Danny Thompson on bongos, John Gilmore on timbales herald the entrance of Sun Ra, on Farfisa organ. The short violent bursts of sound echoing the crack of the whip, the shots through the woods by slave trackers bounty hunters and terrorists in white robes (sometimes blue uniforms) which savaged the communities of African Americans throughout the 19th and most of the 20th Century. This concert took place just three years after the assassination of Dr. Martin Luther King when thought of a Black American President was nonexistent, at the furthest reaches of improbability despite congresswoman Shirley Chisolm’s 1972 bid which was considered merely symbolic. Today. The shots ricocheting from within … with black on black crime, unemployment and lack of education the … manifestation of a socio-physiology full of trauma, self hate and apathy … fuelled by a multi-media platform of disrespect, caricature and humiliation. Each step forward mired in the mud of intolerance. Look at how Google allowed themselves to be used to globally disrespect the first African American First Lady; what message was sent to the African American community and the world at large? THIS is the backdrop of the Music of Sun Ra; the struggle continues into the 21st Century. The clarion call of Sun Ra as relevant today as it was Fifty years ago; this is what gave birth to Sun Ra’s statement SPACE IS THE PLACE both literal and allegorical: thoughts, ideas, equations and constructions outside the petty bigotry, cruelty and inhumanity of MAN.

Following those shots we, hastily depart with Sun Ra at the controls of the Farfiza electric keyboard. The plethora of sounds (reminiscent of Space is the Place theme of Sun Ra’s 1964 movie and music) call for transport out of a world stricken with antebellum apartheid, psycho-social trauma, discrimination and degradation into a mythocracy of omni-being – the lift off toward outer space in allegorical departure from ‘this bitter earth’ onto the planes of cosmic splendour and delight – an entry through the Door of the cosmos to the Omniverse – a place of vast and endless possibilities – the vehicle? The Intergalactic JAZZ of Sun Ra and His Arkestra.

The raga like pulse of ‘Discipline 27 A’ mirroring (in allegorical context) the journey of the Amistad (slave ship liberated by its captives off the seas of Cuba and navigated to US, where they were eventually freed and returned to Sierra Leone). A parallel course with the tremendous need of African Americans for an alternative reality i.e. an alter-destiny.

The Ra solution: the transmolecularization of African Americans to Outer Space (beam me up, Scotty). Personal note: the only ‘transporters’ which work are music, dance, art, prayer and meditation (Sun Ra told us this night and day, but it is for each individual to internalize and actualize this DISCIPLINE, this truth, within his or herself).

The Arkestra charts its multirhythmic journey through the stratosphere of dissonant polyphony, lead off by the alto sax of Danny Davis, joined in tandem with present Arkestra Maestro Marshall Allen. The entire Arkestra reed section become the colours brushed from the palette of the Arkestra, painting pictures of the Omniverse as the good ship RA sets sail … across the sea … of Immortality … Toward the Last possibility … Enlightenment. Love in Outer Space speaks directly to the Joy of self-realization, achieved through a conscious connection with the Universe.

‘The sound is thought of enlightment, the fiery truth of Enlightment, vibrations sent from the space world, are of the starry, cosmic dimensions.’

The vehicle? The Drum. The medium? Dance. Imagine … Visualize Sun Ra strutting the stage in Splendour – the reincarnate of Pharaoh. June Tyson, tall, Ebony, elegant, and regal, Sun Ra’s Nefertitti, gliding across the stage, Replete in flowing robes and sequined garb – a space age Josephine Baker I Katherine Dunham I Eartha Kitt bringing the dances of Cotton Club I Harlem into the Space Age. The Arkestra’s Drums and percussion represent the many languages and tongues of the African Diaspora (which will, one day, speak as one). As the Arkestras rhythms undulate, anchored by Master Drummer Disciple Jac Jacson on his Ancient Egyptian Infinity Lightning Wood Drum, they conjure Olatunji’s Drums of Passion or even the Bembe of Afro-Cuba. Not surprisingly, as Marshall, Pat and Danny frequently worked with the Nigerian Master Drummer (when Sun Ra wasn’t looking (smile). During the seventies and eighties all Arkestra members doubled on African and lor miscellaneous percussions. Each member from a different state representing another tribe yet melding into the common language off struggle and liberation of mind, spirit and body under the guidance of Sun Ra.

‘Love in Outer Space’ develops into a montuno not unlike the Afro-beat of Nigerian legend Fela Kuti (who would call Sun Ra ‘Father’ when the Sun Ra and His Arkestra were invited to the 1977 FESTAC in Nigeria) as Sun Ra unfurls an extended keyboard accompaniment and solo full of rhythmic interplay amidst the dense polyrhythm of the Arkestra’s percussions.

The Arkestra returns to another variation on ‘Discipline 27’? Which mayor may not have another number (as Sun Ra wrote over 100 Disciplines alone) with the Great Pat Patrick or Danny Thompson playing an incredibly effective counter melody quite similar to the muscular lines and rhythm of Fe la’s Egypt 80 Baritonist (now under the direction of Sean Kuti) propelling the Arkestral reed section with contrapuntal lines and riffs. After trumpeter Kwame Hadi preaches on his horn, Sun Ra renders a magical Fela like sermon on the keyboard before the Arkestra horns bring in a wonderfully polyphonic theme, one of the many Disciplines I believe.

The splendid voice of June Tyson leads the Arkestra toward a mantra as she respectively narrates Sun Ra’s proclamation, ‘Somebody Else’s Idea’ (also known as Ah-ah). As the Arkestra weaves through the venue we hear the Great John Gilmore set the Sun Ra rhythm on the drums: Sun Ra’s Concert Master setting the proper groove.

The Arkestra chants, ‘Somebody else’s idea of somebody else’s world, is not my idea of things as they are’ throughout the venue, joined by Sun Ra himself at the microphone, establishing clearly that this song reflects His exact sentiment and world view. Drawing the first segment of Live in Paris 1971 to a fine decrescendo and pause.

Live in Paris continues with Sun Ra’s crowd pleaser ‘Watusi.’ His composition giving full reign to the Arkestra as an African Drum Choir fully featuring his array of phenomenal Dancers, and percussionists; exorted by the Fire Eater Math Samba; Imagine three angels of Dance; June Tyson, Efay Tayo, and Hazoume writhing across the stage with leaps, turns, and twists. The epitomy of’ Angels and Demons at Play’ in mythic delight – marionettes to the bidding of the Ra, contortioning in supersonic speed in duet with the dazzling array of contrapuntal melody and rhythm from the Arkestra.

Listen while you have the chance … find your place amongst the stars … get in to an outer world rhythm, multiplicity of Harmony, equations of Melody … arise and seek … Astro Black and Cosmo Dark.

Produced for Art Yard by Peter Dennett.
All compositions by Sun Ra except from Angels and Demons at Play composed by Marshall Allen. Publishing and Copyright 2017 Art Yard Ltd and Enterplanetary Koncepts.
All rights reserved © 2017 Art Yard Ltd.

The cosmic jazz master would have celebrated his 100th earth year in 2014 but his catalogue of over 150 albums, his unique philosophy and his legendary live performances live on for a new generation. The Arkestra lives on, under the direction of Marshall Allen. ... more

Bandcamp Daily  your guide to the world of Bandcamp

Featuring appearances from Kari Faux, Bluestaeb and and interview with NY-bred artist Wiki